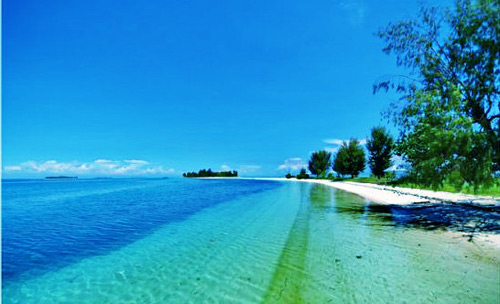 The unspoiled beauty of Morotai Island has been recognized by tons of travelers. It is the part of North Maluku Province and recognized as “the pearl of Pacific Ocean”. Apart from its lush nature, the island holds numerous historical objects, which are the reminiscences of World War II. It is because the island was once used as a base during that world’s historical moment. These include the Portuguese, Nippon, and the United States Army. With such unique attraction, tourists would like to visit the island to witness those objects by their own eyes.

The Nuance
In a nutshell, the island has the size of 1800 hectares. It features breathtaking nature views, especially the beaches with its astonishing underwater scenery. Some spots are also available to enjoy snorkeling and diving! What about the facilities? Well, the best city to stay during a vacation in Morotai is Daruba, which is also considered the biggest. The location is in the south part of the island and it offers a better accommodation as well. On top of that, several local restaurants are available, offering great foods like Gohu, Halua Cake, and Jaha Rice.

Exploring Morotai Island
The most recognizable charm of Morotai is the history. It was under the reign of Ternate Kingdom in the 15-16th century, actually. Even though Portuguese dropped by on the island, they didn’t stay for a long time due to the rejection of the local kingdom. Decades later, the World War II began and Japan took over the island before it was seized by the United States. The US Army built an air base there before the independence of Indonesia. However, Japan surrendered and the war ended once the air base was completed.

Being a witness of a historical event, Morotai Island holds the legacy of WWII. This is a good thing for tourists as they are able to learn history and witness some historical objects directly. Even the air base is still there and everyone can visit it freely. Here is the fact. There are 7 of them, but most of the air bases were neglected covered by bushes. Still, they become a good spot to do photography and a small exploration. The atmosphere even feels good there.

Another interesting thing to do in Morotai Island is to explore the historical objects, either in the land or the sea. That’s true. Some of tanks and ruins of war vehicles are scattered under the sea. In order to see these things, tourists should dive in the water. This explains why snorkeling and diving are quite there and all tourists are likely to want to try it someday. For beginners, they must at least dive in with an instructor as some spots are considered rough and dangerous.

How to Get There
The simplest way to reach Morotai Island is by airplane. First, travelers should fly to Ternate (Balbullah Airport). It takes about 5 hours from Jakarta, actually. The next flight heads to Leo Wattimena Airport in Morotai, which takes no much time. As an alternative, tourists can ride a ferry from Tobelo to Morotai.