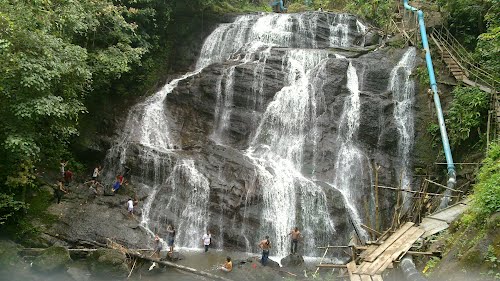 For most people, Morotai Island is quite unfamiliar. The thing is this small island can amaze any tourists. Many historical sites lie in Morotai. It is because the island had witnessed the WWII battles between the United States and Nippon. There was a famous Japanese soldier. The name is Teruo Nakamura. He hid in the forest in order to avoid the enemy. Actually, he was the last Nippon soldier who gave up in the war. Due to his loyalty, people in Morotai commemorate him by building a monument. Not to mention there is the famous Nakamura waterfall.

Visiting Nakamura Waterfall
Nakamura waterfall is located in the midst of Dehegila village. The fall was Nakamura’s hidden spot. He hid in the forest and gathered water from it. Apart from its historical value, this fall also has compared beauty. It becomes a nice vacation spot for tourists. The path can be quite slippery during a rainy season, though. Visitors should be careful and watch their steps. The water is clear and fresh. Thus, the villagers often come here to gather some water. There are also several water jugs nearby.

Dehegila is considered a new village. Though, Nakamura waterfall makes it more popular among tourists. Some people are complaining about the bad access Dehegila. Recently, the government tries to improve its facilities. Hopefully, they can do something to overcome this issue so Nakamura waterfall and Dehegila village can be more worthy vacation spots for visitors. Both trekkers and families should be able to reach the waterfall without hassles. Actually, trekking is the part of the vacation. Tourists should walk in order to reach the waterfall.

During the trip, they can enjoy the beauty of nature. The village has a beautiful landscape so it isn’t boring. There are some rice fields and green hills. There’s also a wild forest near to it. It will be an unforgettable trekking experience for them. Not to mention they can find a fresh and beautiful Nakamura waterfall. It is a worth an effort. Their trip isn’t a waste at all. Apart from the falls, there is also Nakamura Monument. It is another way to commemorate the life of Nakamura in Morotai. Today, it becomes one of the best attractions on the island.

The Noteworthy Nakamura Monument
Teruo Nakamura Monument is situated in Morotai regency. His survivability was quite amazing. Due to this reason, the local government decided to build such remarkable monument of this man. Today, Nakamura becomes an important part of Morotai history. The island had a significant role as a strategic base during the World War II. Tourists can simply take pictures in front of the monument. They can also read the history of Teruo Nakamura in this location.

How to Get There
Overall, Teruo Nakamura has been the part of Morotai Island. His name has attracted more tourists to come here. Both Nakamura waterfall and monument are worth to visit. For those who want to enjoy a solemn nature, the falls are the best option. They can reach it by an either a car or motorcycle. It takes a few minutes from the main city. The location is in Dehegila village, South Morotai district. On the other hand, Nakamura Monument is located in the main city. It is the best spot for those who love history.